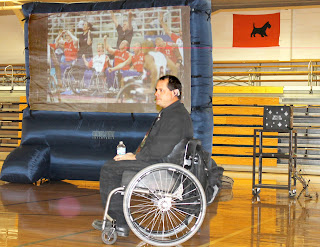 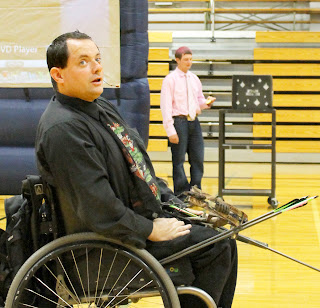 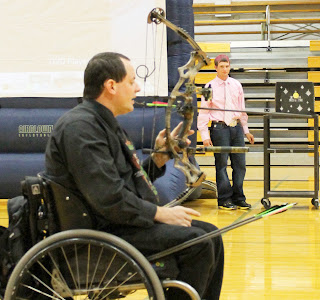 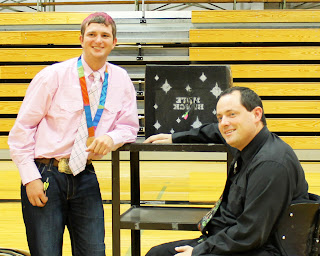 
by Del Bartels
An assembly at the Philip school gymnasium called Motivation on Wheels was held Monday, September 10, at 9:00 a.m.

Philip senior Thomas Doolittle volunteered to hold a small clay pigeon to be shot from his fingers by an arrow shot from a wheelchair-bound quadriplegic who had to draw back the bow with his teeth.
As part of the Dakota Assemblies program, Aaron Cross gave a motivational presentation about staying positive and going after one’s dreams. Cross is a three-time paralympian in archery. According to his Dakota Assemblies program promotional, he has visited schools in many states, giving a down-to-earth message that is meant for all ages.

Cross first told of the bicycle race in which a support van stopped directly in front of him. At a speed of approximately 38 miles per hour, he struck the van and snapped his neck in several places. A medivac helicopter ride, an emergency room, a surgeon, his father ... all blended together. On that day in 1991, the doctors told Aaron and his family, “The best thing you can do for him is get him a good color television and a good remote.” He was a 15-year-old Olympian bicyclist hopeful who could run a mile in 4:50. “Just like that it was all gone.”

“You cannot feel your best friend’s hug, you cannot feel any hug ever again,” said Cross. Admitting that he was probably depressing the audience, he related that his friend reported back to his school, “Don’t worry. Aaron is a little shorter and gets better parking, but he’s just fine.” Upon returning to a reconditioned home, he found out that his own school wasn’t going to have him back and he would be going to a rival school. His friends got 375 signatures of fellow students who would transfer as well if Cross had to. His school allowed him to stay. Later his friend stated during a school concert that honored Cross, “You’ve brought us together. We are closer as a class than we have ever been.”

After the accident Cross began working on getting his arms to function. Back then, it took him three hours to get undressed, showered and redressed. Now, it takes him 28 minutes to do that and get in his vehicle to drive somewhere. “Twenty-one years of focusing on your target; twenty-one years of believing in yourself,” said Cross.

Using humor, Cross told of his learning to swim, “It’s pretty simple; sink and swim.” Because of his friends, he has learned to parachute, scuba dive, hunt and do other activities. He told the audience, “Leading the pack or coming in last – it’s about finishing.” He also stated, “Remember, someone always cares about you.” One day his friend even thought it was a good idea to put a weapon is his hands. Cross has been shooting the bow and arrow since.

As well as the Olympics, he dreamed of being a Navy Seal. A while back, the Seals invited him for a visit. “The Seals brought me into a training course. Beat the living snot out of me! It was beautiful!” said Cross.
According to his website; Aaron Cross, born in Waterloo, Iowa, in 1975, graduated from Augsburg College in 1997. He competed in the 1996 Summer Paralympics and in the 2000 Summer Paralympics, but did not medal either time. He went on to compete in the 2002 wheelchair archery world championships in Nymburk, Czech Republic. Finally, as a member of the American team he won bronze in archery at the 2004 Summer Paralympics.

Cross told the Philip students of his FOCUS – friendships, obstacles, caring, unity and self-esteem.. His website states, “Always sitting, but never not in motion” and “Because life is about living, not wondering.”

Special Thanks goes to Philip H.S. Staff and Students
Always "FOCUS on YOUR TARGET"
Posted by incredible Speaker at 1:43 PM